Middle son has been taking piano lessons for two years now. He's lately taken up playing jazz, where it's all about improv. It's done wonders for his eleven year old hands and brain.

This is the song that got him loaded on jazz:

Labels: all that jazz

I'm taking a leaf out of Mr Sunny Dunny's book and facing Janus' stone visage forward: I have lots of things I think I'll be doing:

Looking forward to the set up in early January of a new writing group: members drawn from here and there in Ireland.

What else: getting my finger out and making substantial submissions to the usual suspects: The Stinging Fly, Crannog, The SHOp... & also some UK journals. I need to build up publication credits for 2010 publication...

Writing up and organising the new series of classes for Dundalk and Newry: quite a few of them are getting publishing credits, so I must be doing something right, but I still need to keep their fires stoked and imaginations running.

Applying for more teaching positions - there's always the OU - might get the old foot in the door there.

And I have a hankering to go to StAnza, been wanting to go this few years, and I see Ben Wilkinson is reading at it - there's an opportunity to see an up and coming talent before he becomes famous. ;)

When I cast my eye back over this preliminary list, I don't feel quite so disorganised, or as disgruntled as I have been lately. I tend to feel over the holiday period that I've lost momentum and that there are things I should be doing, other than feeding, cleaning and washing clothes. But that's what happens when holidays are here. There's simply no time to luxuriate in what I could be doing. Contentment lies in what is to come.
Posted by Unknown at 11:46 AM 8 comments:

Readers, we have the honour of having the first stop of Elizabeth Baines whirling tour, Around the Edges of the World, with her book of short stories, Balancing on the Edge of the World.

Virtual tours have been a feature of Salt Publishing since early September, and this new resource of promoting books and bringing authors to prominence is an imaginative way of using t'internet to get the message out there: books are still very much alive and kicking! It's also a fantastic way of linking up bloggers: whether literary or not.

If you haven't already checked out Elizabeth's great blog, you can do so here. Balancing on the Edge of the World is available from Salt Books. More about the tour very soon!
Posted by Unknown at 9:50 AM 8 comments:

My best friend's dad died on the shortest day of the year, unexpectedly after a short illness. He was aged 73, and it came as a shock to his wife, three daughters and son.

I visited yesterday to offer my condolences and to give a hand, as he is being waked at home. It's amazing to see the kindness of neighbours, friends and relations as they arrive with sandwiches, tins of biscuits, tea bags, crockery or even entire meals. All the visiting women take turns and muck in at the kitchen sink: filling up the urn with water; wetting and drawing tea; washing tea-cups and keeping the smooth wheels of domesticity running as the family come to terms with their loss.

I think there's something very special about a home wake for the recently departed: they are still very much part of the family, being remembered and celebrated and its an important part of the grieving process. It is a hard time of year to lose a family member as it will always be part of future Christmasses to mark their passing. I am thinking now, especially of anyone out there who is in the same boat, or who has an anniversary this time of year.

May the road rise up to meet you,
may the wind be at your back,
may the sunshine be warm on your face
and the rain fall soft on your land.
And until we meet again,
may God hold you in the hollow of his hand.

Traditional Irish blessing
Posted by Unknown at 11:39 AM 12 comments:

No prizes for guessing what this day is, solstice, turnaround day. Now we look forward to the stretch in the evenings; glimmering slowly as they do, until around the end of January those stretches become more noticable.

Not that it's sunny today here in grey old Ireland: there's a woolly blanket of soft cloud pulled over us to keep us warm. A few glimmers of sunlight there at 2pm, but the cloud took over again. Still. I wouldn't say there was any bright light bouncing off the back wall at Newgrange, for the few lucky enough to fit in there and watch dawnrise.

I prefer to think of today as the day to look back at June 21st and try to remember what the weather was like, as well as the temperatures. And maybe even picture the flowers out in the garden in my minds eye. Won't be long, now...

And for some cheery moments, pop over to Minx and see her pics
Posted by Unknown at 2:27 PM 5 comments:

There's a whole of talking going on about Hallelujah, Leonard Cohen's much covered song. Books Inq mentions Dorian Lynskey's article in the Guardian, online today, where a lot of different artist's versions are given the once over and yet, for me there is only one version: the master's voice. Even the Times has covered the phenonmenon in a leading article.

I caught five mins of the BBC's Breakfast show this morning (yes, I am having a strange day) where the topic of discussion was the 'battle' for a Christmas #1 between Jeff Buckley's stripped down guitar and vocals version and the X Factor winner Alexandra's power ballad version. The BBC website has also produced this, er, helpful guide to the lyrics: Smashed Hits by Alan Connor. You can even take a quiz to see how well you think you know the song.

I've often wondered about the power of Cohen's song to resonate so strongly. I think it's down to the fact that Cohen uses an ancient story to stand, perhaps as allegory (but so much more than that) for feelings that cannot be wholly expressed, or satisfactorily expressed by our modern lexicon of mythology as well as language. It reminds me of how well Michael Longley's poem Ceasefire worked too: taking the story of the retrieval of Hector's body, Priam's grief and the appeasement of Achilles, and telling the story in a new quiet way; but the modern context in which it is written (N. Ireland, 1998) gives it a whole new slant.

Longley spoke about how he snatched 'from the narrative flow [of Homeric Greek myth], moments of lyric intensity in which to echo my own concerns, both personal and political.' The particular moment in 'Ceasefire' worked because it spoke both to the moment, behind the moment and beyond the moment. And that's what I think happens with Leonard Cohen's 'Hallelujah,' and why it is that so many artists cover it. Dress it up, dress it down, take it all round town, the words and the music line are still the same: it's a spun thrill that speaks to the emotional moment that we all carry inside us - humanity and, dare I say it, love.
Posted by Unknown at 10:07 AM 21 comments:

Wot I did - Part Two 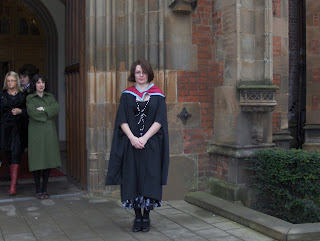 It's getting increasingly more diffcult to steal time away from my kitchen lately to report on doings outside of the familial home: I've gone a bit mad making chutneys, jellies and cakes... and I've not even started on the suet-free mince pies. I'm telling you, feeding six kids and eight adults takes the best out of you, never mind adding in the festive glut-fest on top of things. That Nigella one has a lot to answer for...


Anyway, another photo. This time I'm gowned up for the graduation from Queen's University, last Friday. I've got on the hood for the MA, which is a fetching little maroon and blue number over the black gown. At some point during the ceremony (probably when the procession arrived in) I thought how weird it is at this point in our lives that we all dress up like extras applying for the role of court jester at some olde worlde castle. I should probably write a poem about that...

Back to the stove-face. And will someone please save me from the over-excited hobgoblins who seem to have invaded my children's bodies...?

More later in the week about the Seven Tower's Anthology launch on Sunday gone... It's called Census.
Posted by Unknown at 7:07 PM 5 comments:

Wot I did -Part One 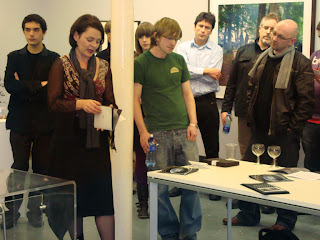 A very busy week indeed, beginning with the launch/talk of the Picture Text module artist's books on Tuesday evening.


The photo of yours truly, in an 'oul paisley number holding aforementioned handmade copy of her artist's book. This comes via SGB, our intrepid tutor/photographer/inspiree. I think I am talking about how William Blake was one of the most notorious combiners of art and text, in his illustrated texts.

More about the rest of my doings over the next few days... and here also a wee teaser about Elizabeth Baines/Fiction Bitch's visit to this blog in the early January!!! I can't wait - I have lots of questions that I want to pitch Elizabeth's way: not least, how she makes her short stories look so effortless... tum te tum te tum.
Posted by Unknown at 8:46 PM 11 comments:

Pork Recall... No Hams for Christmas?

This just in: Ireland recalls pork over dioxin contamination

Just weeks before the big ham-fest that is an Irish Christmas. According to Reuters: "Laboratory results of animal feed and pork fat samples obtained on Saturday confirmed the presence of dioxins, it said, with toxins at 80-200 times the safe limits."

Apparently the culprit is a batch of feedstuff that has used by many pig farmers. We've heard a lot about milk contamination lately in other parts of the world, but we're unused to hearing about this sort of contamination closer to home. The thought of sub-standard sausages, bacon and black and white puddings tears quite a hole in the Irish psyche, when you consider the universally loved traditional Irish cooked breakfast (complete with brown bread).

However, the IFA have tried to reassure consumers that "the recall was a precautionary measure" and that most pork products are still safe. In fact, IFA President Padraig Walshe added, "There will be perfectly safe pig meat on sale to consumers I expect from the middle of the week." Tell that to the people who put pork off the menus for Christmas, and probably for a good while longer after that.

Which probably means that the consumer will have to pay much more for their Christmas ham than usual. Makes you re-consider those vegetarian options a lot more closely, I think... 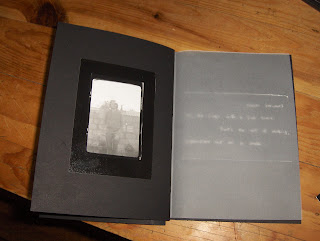 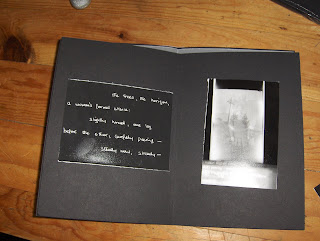 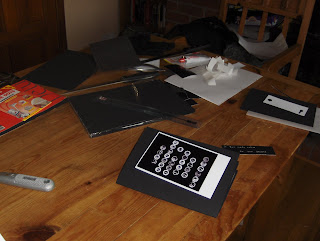 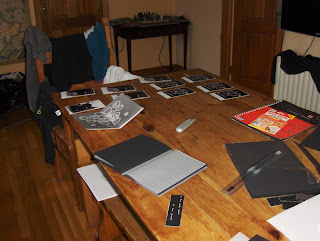 Some pics from my 'real' and virtual desktop: what I can do when I have three clear hours and more materials you can shake a stick at. It's a handmade artist's book (well, it will be when it's finished), designed and made by me, for a launch in Belfast Exposed next Tuesday 9th @6pm. Not anyway near as sophisticated as some of the others' work, but I know how to work within my limits!
Posted by Unknown at 2:28 PM 6 comments:

Another day, Another Rachel

I've been watching Rachel Allen's 'Bake!' and I've received her glorious cookbook as a birthday present (I'm easy to please these days!). Since when I've been busy baking her delicious oatmeal and vanilla cookies for the kids. Pure simplicity they are too. Now I'm thinking about lemon curd, and how to get my hands on a good recipe...
Posted by Unknown at 3:05 PM 4 comments: