Today I finshed off two essays reaching the halfway mark for both 19thC and 20th C courses. Probably both are a tonne of horsepoo, but I can't bear to look at them anymore - which is why I'm on here raving about blogs instead! Apart from Messalina, I've popped in new links to a few other interesting ones that I've found. The thing is when you go nosing around on one blog, you find links to other blogs, which lead you into links to other blogs - I found myself wandering off as far as Australia at one point! Anyway these few are just the start of some I've found, I'm sure.

I left work last week. Crunch time came in the form of too many migraines and not enough satisfaction. I've had to learn (again!) that I'm not superBarb, nor never will be. I can't tell you the relief I've had over not having to put in twelve hour days any more. Even though it was 'just' three days a week, it was still three days too much and meant that weekends were catch-up time with the washing (believe me eight people can generate a heck of lot of washing), cooking etc. etc. That left two days to fit in 32 hours of study! Man, it just wasn't happening...

Since then, I've finished the two aforementioned essays, had a total recall on the f*&*& manuscript that I've been hawking around Irish publishers and feel much better focused on what I'm doing and where I'm going. It's all the fault of the 20thC tutor, who told me that with a good deal more application I could get Pass 1 grades. I wish!
Posted by Unknown at 5:33 PM 4 comments:

Ohmigod - is it really April? 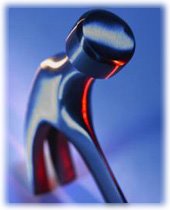 How lax have I been, not being in here for a while? I had actually forgotten my username and password - that's how long it had been!

Well, some news to report - first the bad news: not able to continue being a non-smoker. Never mind there's always next year!
The good news - a random submission to SouthWord has passed and the poem they chose was the one I least expected to get anywhere. It just goes to show, you can't underestimate the power of someone else's subjectivity! When I have the hard copy in my hot lil' paws, I'll post it here.

On other fronts: study is going reasonably well: I haven't disappeared under a snowball of 20th and 19th century writing just yet. I am still relishing the prospect of getting to the end of this year intact, but already some of the things I am learning from the 20th Century literature course I am putting into play in reviews and in my own thinking. The aesthetics/instrumentalist debate has been very stimulating and I find myself erring on the centrist side (ha ha). That is to say that I can see the merit of both sides of the argument. But in studying this debate, I have realised more clearly somthing I had always thought but hadn't really internalised and then externalised as my own take: I like it when the writer doesn't hit me over the head with a hammer trying to get the message across. I like subtlety! So this has naturally sent me back to my own work and to others' as well, eking out those more cryptic pieces and having a second, third and fourth look. It' s like trying to piece together a puzzle, and I love puzzles!

On the work front - well, it's still there, but I have had such a rotten few weeks with headaches etc. that I very nearly gave up the ghost. There really isn't much you can say about filling in spreadsheets and fiddling with figures - apart from the fact that I find it enjoyable in a dentist's drill sort of way (you're glad when it's over). I'm looking into an application to Dun Laoighaire/Rathdown council's Writer in Residence post. Boy would that be a step in the right direction!

Recently read:
The Dublin Review - Issues 21/21 Both very different to what I expected, really interesting.
The Stinging Fly - This keeps on going from strength to strength read a review here:
The SHOp - Beautifully produced and did I mention I got one into Issue 19?
Anon - Just signed up for this and I really like the idea of blind submissions


Random piece of self-promotion: Review of Mercury, the Dime