I'm off to Edinburgh in Scotland on Sunday week to read poetry with, get this: Sally Evans, Alan Gillis and Claire Askew. All very fine poets in differing ways.

Rob MacKenzie, who organises and promotes the Great Grog readings, has a fine poem of Claire's already on display, she's a promising young poet. Alan Gillis's Hawks and Doves was nominated for the T.S. Eliot prize this year; and Sally Evans is the long-serving editor of Poetry Scotland as well as having several poetry collections extant.

Now, as we say here in Ireland, try and folly all that!
Posted by Unknown at 9:28 AM 9 comments:

Hey - there's my buddies and me

Here's the collaborative project, Picture-Text that I've been beavering away at on Thursdays in college. The project links QUB's varied and amazing collections of materials in different departments and will fuse pictures and texts to create new artwork for a centenary exhibition.

It's all a bit up in the air at present, but we'll get there (no choice really, deadlines are lifelines...).

Lovely to see everyone's work emerging there. I'm looking forward to seeing the exhibition when it comes and the images that Sylvia uploads of us looking worried/frantic/inspired over the coming weeks ;)
Posted by Unknown at 8:11 PM 5 comments:

How not to do NaPo

Oh dear: I've stalled on NaPo around about 17 poems in. Not because I've nothing to write about, but because I suddenly realised that I had a lot of work to do on the pieces that I need to submit for the end of this semester. No-one said it was going to be easy!

NaPo hasn't been a waste of time though: I've written 17 poems, which is 17 more than I had, and I can use about six or so for the major submission. They tie in nicely with the (hopefully)emerging theme of time and memory, so nothing wasted - ever.

I've three assigments on the go: one a set of ten poems about 19thc Victorian attitudes towards sex; a set of twenty as yet unrelated poems (but I'm working on that you can hear the thumping and banging from where you are, I bet) as well as 2000 words of commentary about process, development, themes etc. and finally a review/critique of a poetry collection or collection. That last one sounds simple enough, but I'm having difficulty in sourcing previous collections of the writer whose book I'd like to review for this assignment. I'd like to be able to give a very rounded review and that means researching the previous three... odds bodkins!
Posted by Unknown at 9:52 AM 6 comments:

I did a book swap with Nigel McLoughlin recently. It arrived (a week after mine made it to the UK) and I was really thrilled to open the pristine copy and read it through inside. His language has a really lovely taste on the tongue: it's definitely savoury, not sweet and there are some excellent poems contained within the covers.

Nigel's done an interview slot on National Pubic Radio, it's a quick five minute slot. In this interview he briefly discusses with the presenter Lynn Neary growing up during the troubles in Northern Ireland and then reads (in fact, I think possibly recites from memory) a great poem Seanduine about his son Euan.

Interestingly during the interview, Nigel talks about how he composes his poems - they are orally composed, which means he tries out his language aloud long before he commits it as a poem to the page. This explains why they read so fully in the voice in my mind as I read them. There's a lot to be said for the word out loud.
Posted by Unknown at 9:31 AM 13 comments:

It never ceases to amaze me how little I know of and about poetry, but I love discovering new poems by poets that have been and gone, but left their mark.

It began a few weeks ago when I was reading Muldoon's latest book of essays, The End of the Poem. I came across Robert Lowell, who I'd heard mentioned in the same breath as Elizabeth Bishop in college but hadn't come across his work all that much before (yep, sheltered, dumb life). I read the extracts and got out my trusty Big Book of Poems, the Norton Anthology of Poems (4th ed), which I won't say makes comfortable bedtime reading, because it's a behemoth of a book to have open on your lap.

Anyhow, I've been sticking to 20thc poets, particularly looking at US poets, like Lowell, Bishop and came across Randall Jarell last night (as well as Charles Olsen but that's for another time). Again, I've heard his name mentioned before and wanted to look at his work. Born in 1914, he was old enough to serve during WWII, in the air corps and wrote some poems about this subject. I found the selection interesting because I've never read WWII poems before: it's usually Owens, Sasson, Graves and Brooks from WWI we reach for, when we think of war, or more correctly anti-war, poetry.

Anyhow, here's a link to 'The Death of the Ballturret Gunner' It's only five lines, give it a go.

And I think Jarrell has quite a mischievous twinkle in the photo on this page too. Some poets can be quite handsome, I think :)
Posted by Unknown at 1:11 PM 4 comments:

A Picture tells a Thousand Words 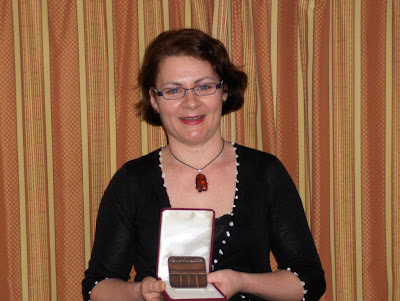 I'm always promising pictures but not delivering, so here is one of me looking particularly pleased with myself.

The award I'm holding is the one I was given on Friday, for the third place in English, in the Feile Filiochta Poetry Competition: it's a lovely little bronze plaque. It was a fantastic evening sitting listening to poems being delivered in Irish, Scots Gaelic, Cymreg, Polish, German, Italian, French and English.
Apparently this is the last year of Feile Filiochta on its own: next year Poetry Ireland will have a role to play in this high-profile competition.
There's a lovely edition of all the winners' poems nestling on my shelf now.

Last night I attended the first of the series being run by the Oscar Wilde Centre for Writing; the home of the MPhil course in Creative Writing at Trinity College, Dublin. They are hosting a whole series of events every Tuesday evening during April to celebrate ten years of their CW programme.

We were welcomed by Stephen Matterson and the writers were introduced by Eiléan Ní Chuilleanáin: being three; Derek Mahon, Mary Morrissey and George Szirtes. The very sizeable crowd that turned up had to be relocated to a larger lecture theatre as the event was oversubscribed - a very happy thing to happen at a reading event like this.

I went along with two other writer friends and we sat rapt through the evening: Derek Mahon read mostly from new work, with an environmental flavour, so we were getting very recent work indeed.

Mary Morrissey is a Writer Fellow at Trinity College - a novelist with Mother of Pearl and The Pretender behind her, she read from WIP; she is writing a 'counter-novel' to Sean O' Casey's "autobiography" from the point of view of O'Casey's older sister, Bella.

George Szirtes read from Reel to Reel as well as more recent work and one or two of the poems I recalled from last year when he visited Trinity as part of the Poetry and Politics series in February. All three participants received very warm applause for their readings.

I've forgotten to record that the joint launch in Belfast with poetry colleague and friend, Enda Coyle Greene on the 7th of March went terrifically well. A large contingent of friends, colleagues and peers came along to No Alibis book shop in Belfast to hear us read from Kairos and Snow Negatives; we were honoured to have Sinead Morrissey say a few words on our behalf about poetry in general and our work in particular. The reponse was such afterwards that all the books we had brought to Belfast were cleared off the shelves. Dave of No Alibis was absolutely thrilled with the success of the evening, as were both Enda and I.

A week later, on the 14th of March, I had the pleasure of attending one of the Candle and Mirror series organised by Richard Irvine, in the Harty room at the QUB School of Music (a wonderfully resonant room for the spoken word). This time the line-up was American (Over Here): with Chris Agee who lives in Belfast and Alicia E. Stallings, who lives in Greece. Both poets read very well, but I was very taken with Stallings' work, which is snappy, clever and reveals great depth and shows how you can use form imaginatively. All the audience received a souvenir pamphlet of the poets' work to take away, which I really enjoyed reading later on. We were lucky to have had a workshop with Stallings the day before the reading; adding a new twist to the workshop series.
Posted by Unknown at 10:34 AM 10 comments:

And the winners have been announced and there's our tutor from last semester, Sinead Morrissey taking first prize - go Sinead!
Posted by Unknown at 2:02 PM 2 comments:

In the US it's National Poetry Month. Wikipedia explains the history quite well and Poets.org have lots of tips on how to get more poetry into your life, whether reading it yourself from the library or buying more poetry books or just generally getting out to readings etc and immersing yourself in poetry, in whatever way you feel inclined.

NaPoWriMo is part of this celebration too - where like the novel writing month of November, you can commit to writing a poem a day for the month of April. I have sworn blind I would do this every year for about four years now but always miss the first few days of it due to study.