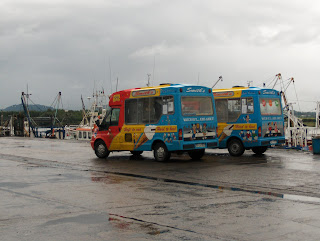 Come on, nobody can resist these! Give us a caption for this picture, please! Do have a closer look, if you need to.
Posted by Unknown at 9:36 PM 16 comments:

Well, that's what the latest Guardian Poetry Workshop is advocating as an exercise. I always like to read these challenges put forward each month by a different poet.

This month's poet is Fred D'Aguiar who proposes finishing off Coleridge's unfinished exercise in writing under the influence. Most of us do know the first line: 'In Xanadu did Kubla Khan / a stately pleasure dome decree.'

Two things: does that mean that for a real authentic piece one should resort to Laudanum, as Coleridge is alleged to have used; and should one arrange for a parson to call at some unknown time across the day of composure to add that extra authenticity?

So, that's my weekend's activities all sorted out now, how about yours? Closing date for this one is next Weds, 27th August. Wouldn't want to be an all-weekender party then ;(
Posted by Unknown at 2:13 PM 5 comments:

The Sound of the End of the Summer

Up and down this fair green land of ours, you can hear the faint sound of glee, tinged with grumpiness, as mothers hand over their last few cents to shopkeepers in exchange for goods that will help the children of this land on their annual 'Back-to-schooling.'

Every year in all sorts of newspapers, big and small, there are researched articles, bemoaning the price of books, uniforms, bags, stationary, shoes (I'm sure I've missed something), totting up the average spend of the 2.2 kid family and making us all have mini-strokes into our Saturday cereals and posh coffees. Other support articles appear on what sort of packed lunches we mothers should try out for our offspring's bored tastebuds (God help the poor wee chap who survived seven years of 'hang sangwiches.')

I laugh in the face of these articles. No-one has the art of Back-to-School as well researched or executed as me. I could wipe the floor with most of the statistics that you'll see in print. Getting six feicers ready for the new school year is one challenge that I relish. My only complaint is that Back-to-School happens during the holidays, making it the most expensive part of the year, matched only by the ferocious spendfest that is Christmas.

You see, I take a certain satisfaction every time I spend money on this ugly-but-necessary-school-badged-fleece, that rare-and-hard-to-buy-school-book: I am buying my way back to a certain (albeit limited) freedom. One that I know the weather will probably support me in too - I call the radiant sunny days that we get in Ireland during September 'Mother's Treats.' Just don't mention the phrase 'Free Education.' That really sets me off!
Posted by Unknown at 10:52 AM 13 comments:

Labels: back to school, family life

Back to reality from Dublin on Thursday, an excellent reading, listening to all gathered in Chapters of Parnell Street. I love the themed readings, this one being Sun, Sand and Ice Cream, because it pushes you out of your normal reading choices and can sometimes urge you into writing about things you'd not considered before.

Most poets managed to link in the sun and the sand, in their readings, without too much stretching the framework. Good to hear the Galway contingent, Aoife & Celeste, who unfortunately had to turn around and head back to Galway. I bought their chapbook, Smoke & Skin, available from Lapwing, Belfast. I snuck in the ice-cream, reading the one posted below about Our Family. I cheated a wee bit on the sun, getting in a long poem that I wrote in June about boobs. It was its first outing ever at a reading and went down surprisingly well. Inspired, in part, as a riposte to Alan Gillis's 'The Lad,' I would post it, but it's under consideration at present. Fingers crossed, eh?

I went on a mini book-buying spree in Hidges Foggis, buying Mick Imlah's 'The Lost Leader,' one I couldn't get back in June, for love or money; a selected of John Hewitt, a selected of Michael Longley and the recent short story collection by Claire Keegan, 'Walk the Blue Fields.' I read the first story set in Achill in the Heinrich Boll cottage (and laughed), whilst sitting on the grass in Stephen's Green - a little hard to imagine the sunshine of Thursday against the storm-lashed day that's outside now! I've since read the opening poems of Imlah's - bloomin 'eck. Great stuff.
Posted by Unknown at 12:21 PM 10 comments:

Ross Hattaway was born in Wellington New , but has lived in since 1990. He has had many varied jobs and currently works as a civil servant. His first collection of poetry, The Gentle Art of Rotting was published by in 2006.

Rob and Colin have put me on to this excellent resource site, The Scottish Poetry Library. In its own words it is "the place for poetry in Scotland, for the regular reader, the serious student or the casual browser.Since its foundation in 1984 it has amassed a remarkable collection of written works, as well as tapes and videos. The emphasis is on contemporary poetry written in Scotland, in Scots, Gaelic and English, but historic Scottish poetry and contemporary works from almost every part of the world feature too."

In amongst the exciting goodies that it offers, there's a Reading Room, where they ask different poets to name their 'classic' poems along with reasons why.
Rob talks about Milton's "Paradise Lost", where "Satan gets the best lines;" Claire Askew recalls her childhood amazement at Lewis Carroll's "Jabberwocky," with its "weird, wonderful, onomatopoeic words;" and Colin Will reveals the "underlying subtleties" of Robbie Burn's "A Red, Red Rose. These are just three of many poets that have taken up the challenge of the 'classic' poem: Vicki Feaver, Billy Liar and many other well-known poets are there.

There's also a feature called the Favourite Poems, where you will find poets like Simon Armitage, Jackie Kay, Michael Hofmann and Michael Longley talking about selections of poetry that they admire. Happy days for anyone wanting to while away a few hours reading and learning about poetry.

An Impression of Our Family on Holidays...

Mam: LEAVE ME ALONE - MY HEAD IS MELTED!

Taking Stock and Leaving a Barrel

I am making the annual pilgrimage to Kerry, with seven kids, two cars, lots of clothes, assorted amusements and another adult for a week.

What chance do you think of me getting some writing done there, with all the distractions?

Sun, sand, barbeques and some sea air. Then there's the view from our sitting room window. Ever changing, it's better than TV! There's a lot to be said about being half way up a mountain looking down over Dingle bay.

I get to read in Tralee on Monday 4th August, with many poets, new, old and young... and chat about the future of books...

See you all when I get back, and feel free to party in the comments box, a wee tradition that started over at Minx/Debi/Pundy's house. I think.
Posted by Unknown at 6:40 PM 11 comments:

Labels: getting away from it all, holidays, Kerry, writing
Newer Posts Older Posts Home
Subscribe to: Posts (Atom)