The Wedding Group
He looks to the centre –eyes glazed.
She looks to the right – smile glazed.
Baby’s eyes are devil red, facing front
as are the eldest sons of He and She.
The foreground is a blur of children.
Tired eyes rubbed, a curtsy of
thirsty white chiffon,
and a stampede of five year olds. 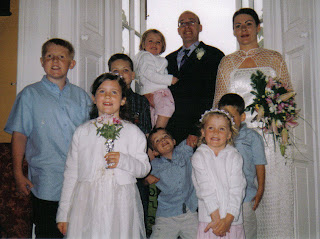 You wanted it - You got it!

Toddle on over to Eyewear, to see a brand new poem by me!

Many thanks to the ever prescient Eyewear, aka Todd Swift, for the promotion.

Every Friday, Todd introduces a different poet and a poem of theirs. Wouldn't it be great if some day there was a published collection of all these contemporary gems...? You know, like Ruth Padel's 52 Ways of Looking at a poem - only different...
Posted by Unknown at 6:15 PM 11 comments:

A man who was found dressed in latex and handcuffs brought a donkey to his room in a Galway city centre hotel, because he was advised "to get out and meet people," the local court heard last week... read more here!

This story has done the rounds of the world, apparently, and demonstrates how the maxim, 'Never let the truth get in the way of a good story', still holds true!
Posted by Unknown at 8:22 PM 8 comments:

Next Tuesday, I've been invited to attend a launch for an anthology called Drogheda Writes, an anthology being published in my old home town, which is about thirty miles away from where I live.

I say home town, because I spent a good eleven years living there and felt like part of the town. It was quite unnerving moving back to Dundalk in 2005 after not having lived here for almost sixteen years. But I got used to it.

Anyway, Roger Hudson, one of the co-runners of Drogheda Creative Writers invited me to submit poetry to the journal, so I did! And next week I'll get me grubby mitts on my contributor copy :)

The launch is being presented by Catherine Brophy, an Irish novelist, short story writer, and also a scriptwriter for the long running soap, Fair City, on RTE 1 (think Coronation Street, but with Dublin accents).

I will be rounding up relatives and friends to come along and buy lots of copies to show support for the project. As ever, my camera will be in tow!
Posted by Unknown at 7:51 PM 1 comment:

This is one very tired girl reporting in from Ireland! Just started new job with the PGA Irish region in the local Golf Club - before you start thinking, 'Ooooh,' it sounds more exciting than it actually is. My job is my first real love - accounts, which I only discovered about five years ago.

Being one of those in school that thought 'Maths! Yeuch!', it came as some surprise to find that accounting for things is something that I really enjoy. Well, it shouldn't have been a surprise, really, I do organised quite well - sometimes - and to me accounting is something that is an extension of that. It's just organising on paper, and computer, and in boxes, and in folders. And that's the thing really, I do like putting order on things.

Now, if only I could apply the same method to my words and get a handle on form..?

This is my next mission. As I'm currently tackling a Creative Writing course that involves challenging my notions of what constitutes methods and forms of writing, poetic form is on my list of things to do this year. We are going to be tackling the nebulous area of form and how to overcome the jitters . I can't wait until that section of the course - but - there's the fiction part to get through first, and surprisingly for me, I am enjoying that part tremendously, stretching wee 'fictional' muscles that haven't seen the light of day since way back when.

Oh, and I've been invited to a launch of a collection of writing that includes mine! More news soon!
Posted by Unknown at 7:05 PM 13 comments:

Carried away by a Moonlight Shadow

Apprentice has some lovely pics here from Saturday's eclipse.

They beat the pants off the tiny white speck on hubby's mobile phone camera!
Posted by Unknown at 7:07 PM 10 comments:

When there's nothing else for it...

Deep dark stuff, or not as you like it - but I really don't think they make being a teenager like this any more. Aahhhh!

Getting Ready to Fail

Today has been, as has most of the week, get ready-for-the-new-job day. I usually shop once a week for basics for the house - you know - toilet paper, tins of tomatoes, fabic conditioner - that sort of non-perishable, non-branded stuff, at a local cheap-as-chips supermarket.

I then shop on a second day basis for fresh fruit and veg and meat to make the main meals that constitute keeping six feckers and two grown adults in eating. But that had to be upscaled today, as I adopted the tactics usually observed by people who believe that the world is going to end - or when there's snow expected.

My second youngest daughter said it all:

'Wow, the fridge is full, Mammy. The last time it was full was when Granddad had his party here.'

You see, living with this lot is like living with a herd of one year old bullocks. They graze from one end of the field to the bottom, liberally spraying the place with cow-pats while they're at it. Okay, except for the cowpats, but you'd wonder sometimes when you visit the bathroom and have to flush before you use the loo! I digress.

Another part of the frantic rushing around has been that the oul 106 finally made it over the NCT (MOT) hurdle at the second attempt after a quite definite refusal first time around. Reparations (I do mean that) to the car included: a new bonnet, which had to be re-sprayed, a quick changing around of tyres, but the worst bit was the emissions bit. This is where the Hydrocarbons and other noxious bits must fall between certain tolerances. My wee 106 failed on the closest of fails to these tolerance levels.

It was supposed to be serviced by the garage. They did not do this job - why? Well, I reckon it just didn't occur to yer man to actually figure that bit out. It certainly wasn't for the want of asking. I took the car to another garage to have its exhaust checked. Nothing wrong with it there.

So, what do you do when you're car's not well, and you know what's wrong but just want a quick fix? That's right, look it up on the internet and see what fellow NCT strugglers have done. The last word on emissions, is an engine additive called STOP SMOKE. No - it's not another prophylactic for would be non-smokers, it's for the 'older' engine.

After this addition I took it to yet another garage man to have the emission levels checked again. Before testing it, he comfortingly told me that his machine has been on the blink for several weeks. He then tested it. His machine told him that my car could beat records for Hydrocarbons - three times the levels it should have. I came home in a stinking bad mood. My car would fail the test again...

This morning I took my wee car for a short drive along the coastal route near where I live, through a small village called Blackrock to warm up the engine.

I then drove it into the test centre, fully prepared for the white sheet of paper afterwards telling me how it had broken the test centre records for failures. Turns out that your man's machine was definitely up the Swanee river. My car passed!

And the best laugh of all is that all this bringing it here and there to get it to pass cost me - the grand total of €0. How could they charge me, when they hadn't actually done anything? Well, except perhaps for the €4.99 for the Smoke treatment additive and I put that in myself.

By the way, did you know that there's a lunar eclipse about tonight? Hmm.
Posted by Unknown at 7:19 PM 3 comments:

I bumped into Laurence O'Dwyer the other evening at the George Szirtes evening in Dublin. Laurence read with me at our Poetry Ireland Introductions evening in late May 2005. Laurence's work has won awards and a good deal of attention already!

Anyway, in the pub afterwards, we had a great time talking about various aspects of poetry and sharing insights and resources that we had read on poets and other writers too. This site, recommended by Lar, is the American Literature Library and in particular you might check out Sherwood Anderson, in particular his Winesburg, Ohio. Very understated fiction and character realizations here, which go for the psychological, through the physical using fairly pared down language - the American idiom for the most part.

While you're there, look out for a very short story by Liam O'Flaherty, 'The Sniper' and my favourite lady from last year's 20thc Lit course, Virginia Woolf, with 'The Haunted House'.
Posted by Unknown at 8:19 PM 3 comments: