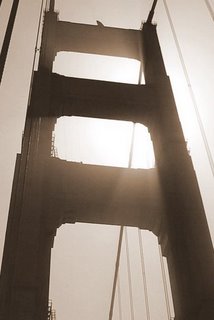 ...into this new year, and it feels like it’s been around forever already! Sheesh! And just to celebrate, there's a nice picture of something really big and phallic (well sort of!).

My latest fad is the present I received from my father in law (yes they do have their uses!) after Christmas; a slow cooker. Being a great one for turning my nose up at things for no reason other than the colour, I surprised myself by taking to the slow cooker like the proverbial duck.

And no, I haven’t cooked duck in it yet, but I may well try it sometime soon. So far, we have relished Burgundy Beef Stew with Horseradish Dumplings… yum, yum… Spanish Chicken: Chicken in a tomato sauce with chorizo and black olives… I won’t go on… you don’t want to have to clean drool off your keyboard.

So how does it work? Basically make up your casserole as you would have done before and tip into your slow cooker, pre-warmed of course, put on Low and put the wooden spoon down and back away from the kitchen! Eight to ten hours is what most recipes recommend, although I have done bolognaise sauce in five hours (albeit on high for one of those hours!).

Your taste buds will never be the same again. And the real beauty comes from if you’re a working type person, you could prepare before work (or even the previous evening), leave it on all day and come home to a gorgeous aroma permeating your home. Other things to try in it are pot roasts (where you flash fry a chicken or lamb and pop it into the slow cooker) and deserts.

…for I have sinned – no I haven’t actually… still going strong at 16 days and really back in the swing of things at the gym. I’m glad I’ve got my routine going again, because I had been a bit naughty over Christmas and put on a little extra!

So – very little to report except for making progress on studying Katherine Mansfield’s short stories. Fascinating reading by Delia Da Sousa Correa, who has quite a lot of input on the 19th century course I’m doing as well. Anyhow, the whole thing about Mansfield is her style, which is described as being ‘poetic and mysterious’ and ‘open to reconstruction by the reader’ (C20th Texts & Debates, 2005, p.95). It’s all about what she doesn’t put in the stories, which leaves the reader having to ‘intuit’ what’s going on. Most of her stories need a second or third reading to really appreciate all that’s going on. Her stories depend on the psychological movement of the characters rather than an actual plot, to move narrative forward.

We have a very interesting assignment to do now, that involves looking at that old chestnut of Wilde’s: “All art is useless,” defining what he meant and then seeing whether the same can be said of either Mansfield’s work or Gibbon’s Sunset Song.

A-n-d I'm currently chasing after an ideal opportunity that’s turned up at Poetry Ireland for a cover administrator for six months! Would that be my dream job or what!
Posted by Unknown at 5:14 PM No comments:

Today is day ten of my new healthy non-smoking persona, but it’s really not being made any easier by the struggle I’m having with an essay I’m currently oxter-deep in.

Mr Dickens does write exceedingly long books, and the case of Dombey and Son, is no exception. I’ve been rereading and writing so much now, that when it comes to putting the actual essay together, I find I have to make a conscious effort not to write in his style!

That is not to say that I don’t enjoy writing the essays, it’s just that I become so involved and enmired that I can’t quite surface. Indeed I think it’s a little like reading a really good book. There’s that sadness at the end when you finish it, because you know that you haven’t long left to inhabit that imagined world any more.

Other exciting news: received a postcard from distant cousins in France today, wishing us a Happy New Year and hoping for a ‘rencontre’ with some of us during this year. I think it might be good idea, as Tante Denise is now 95, and I really don’t think we should let things go any longer. A tentative plan is in place for another Parisian trip in March or April.

I really enjoyed Paris in November despite all tribulations. I really want to show Paris to my husband as I feel I know it so well (having been there twice before!). It has such a compact city centre, with great public transport and the buildings and the museums – well, what can I say? Go and see for yourself!

Yes, well it will get boring if I keep going on about it, won't it, so I'll keep it to a weekly update now, I think, seeing as how I've got over a week...

Nice 'lil picture here of some berries on a holly twig, reminding me of the holly tree at the bottom of our garden, or should I say trees, as these things need to grow in pairs, if you're to get any flowers from which the berries come from - which leads me nicely into remembering a friend of mine's story about Holly, who ended up snaring a boyfriend in an ancient wood somewhere. Hopefully Messalina'll dig it up and post it somewhere...?

Now then, on to my main thought for the day, apart from what to do with the Dombey family
- what a dysfunctional family - I thought mine was bad... but then again, this whole functional/dysfunctional thing, well, I mean what is normal in a family these days? Seems all pore Dickens wanted was to put the soul and spirit back into the hearts of people, 'wot 'ad 'ad it ripped aught.'

... anyway quite a million miles from what I was actually thinking about, which is a question rearing it's head over and over again; that of art and it's uses... I've given it a lot of deep thought - that's deep thought, not deep throat - and have come to the conclusion that I'm much too young to be having deep thoughts of such depth. I might try again later after I've finished the Nineteenth and Twentieth century courses.

I seem to have an enduring image from the HitchHikers Guide series of the guys asking the computer the answer to life, the meaning of, and feel like giving the computer's answer: 42. That Douglas Adams knew what he was on about alright!

Posted by Unknown at 5:45 PM No comments: 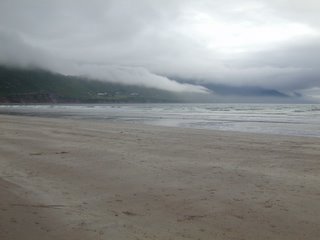 Here we are now on day five of no smoking. It's actually getting a little easier. Although I am going to have to get back to a regular visit to the gym, otherwise I'm not going to fit into all those size 12 clothes I own...
Looks like I may end up getting a job despite myself... To fill in, last year I applied a la website to the civil service. After a battery of different aptitude and psychometric tests, they've asked me to supply some more information so they can give me a right old grilling at the interview... do you think this is the time to mention the Transylvanian connection?
Posted by Unknown at 6:37 PM 2 comments: 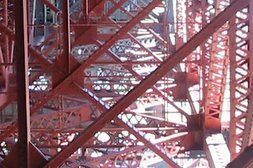 Well, there's underneath the Golden Gate bridge on the far side from the city. I'm browsing through these pictures today because a) I'm indulging in some fanciful escape from study and b) I need some cheering up today!

It's day three of giving up smoking and it really is turning into a battle against my own will. I have a little voice inside me saying... have a smoke, you want a smoke, etc... and another little voice going... no! be positive, you've got to day 3! what an achievement, etc... sheesh!

If I survive another day 'weeth thee leetle voices', I reckon I'll be doing well... One part of me thinks that this is not really the best year to try giving up, the other part of me thinks, well, in two years time - the big four-oh... you still wanna be smoking then? Perseverence is every thing!

Posted by Unknown at 4:02 PM No comments:

It's not that often that we get a chance to be so fresh, so this year, I figured, hell why not?

I do have a problem sharing but then again, I figure, so does the rest of the world, and hey, who really cares? :¬)
I'm me, I guess, just a wee small person, and part of the way wide world that we call the 'universe,' so who really cares what mark I leave on owt???!!!?
Well, as me pore oul grandam use-ta-say; "What ya gotsa lose, 'cept yer anonymity?"
Posted by Unknown at 3:29 AM No comments: