You know, you can't beat the sound of a well-tuned harp on a wet day at Tara. That and the sound of specially picked words.

The recital went very well, considering the rain did its best to mar proceedings. Paul Muldoon acted as master of ceremonies and did an able and relaxed job of shepherding proceedings along. Unfortunately, the event had to repair to the disused church from the planned outdoor, that has been plainly restored, but the acoustics suited the gig very well.

I came a little late, just as Susan McKeown was giving a beautiful rendition of a song in Irish and English (for us heathens with little Gaeilge), accompanied by Aidan Brennan on a beautiful acoustic guitar. Paul Muldoon then quickly gave us a few poems; one about Beagles hunting the great Hare seemed to set a thread running for the next few turns at the mic, and the great Michael Longley gave us some beautiful poems that come from his time spent at Carrigskeewaun, over in County Mayo. He commented in his introduction that fifteen years before, he and a good few other poets and musicians had taken another 'turn' at Tara, to try and invoke peace. It seemed to have worked, he said and the audience loved this wry comment.

One of his set, about his first grandaughter, who came after four grandsons, was really touching. I think it is called 'The Foaled'? But I'll need to check that in my Longley Selected later on. Michael Longley was then followed by Laoise Kelly, an amazing harpist, who actually comes from Mayo.

Laoise has been involved with the protests against the motorway development for a long time, and told us of how she had met Paul Muldoon in, of all places, New Zealand, at an event. Her harping was a great addition to the programme, as she played 'tunes' that were collected over hundreds of years by people like Petrie and harp gatherings in Belfast - never mind the usual Carolan tunes that people expect from a harpist. I enjoyed her sets very much, as it reminded me of my own days spent on the harp from age fourteen to sixteen. Harping ruined my fingers for guitar playing, as I found out later on: I pluck instead of strumming - something which drove my later guitar teacher mad.

Just before I left, Paul Muldoon read from a sequence he has called 'The Old Country' - not a mocking poem about Ireland, but one that celebrates the localisms and colloquilisms of Irish cliches. I liked this very much, as did the audience.

Anyway, there was an email sheet sent around to collect addresses, and it is hoped that they will repeat this gathering next year to celebrate Tara's heritage and keep its plight in the public eye. So, I'll keep ye posted!
Posted by Unknown at 6:19 PM 8 comments:

A Turn at Tara

I'm going to this reading today at Tara Hill, which is organised as part of Ireland's National Heritage Week. Paul Muldoon and Michael Longley are reading there, with music from Susan McKeown with Laoise Kelly, Steve Cooney, Aidan Brennan, with perhaps more performers on the day.

I've loved Tara Hill a long time. When I lived in Drogheda, it was in easy reach and often on a Sunday we'd go there as a family and wander over the hill, past the Mound of Hostages, and the Rath of Cormac , the Lia Fail - the stone of destiny, and we'd always finish with a digression over to the lonely Rath of Diarmaid and Grainne; me imagining the two fugitive lovers of Irish legend spending some time there, and finally go back round and cut through the Banqueting Hall to the exit gate.

Of course it sounds like there are buildings on Tara, but there aren't. What there are instead, are shapes in the ground, which have acquired names through folklore and legend glosses. There are mounds, and circles of ridges - to keep someone or something in, or possibly out. And usually on Tara there are sheep grazing. Lucky sheep to be wandering around on the hill where it is thought High Kings and courtiers might have gazed out over the plains of Meath at the distant blue and purple mountains to the North and West and South.

Today, we're going back there after an absence of about two or three years. I'm wondering what it will look like, since the-powers-that-be decided that it was a good idea to build a motorway just below it. And I know my kids will enjoy going to the place with the sheep - perhaps they might enjoy the poetry and music too. After all, "The harp that once through Tara's halls /The soul of music shed / Now hangs as mute on Tara's walls / As if that soul were fled ..."

Not today though. Not today.

Back to School - with a bang

This back-to-school malarkey doesn't get any easier each year. I'm just in the last throes of it today and tomorrow: hemming trousers for the boys in extra strong stitching, so they don't pull down their hems through repeated putting in of their legs; extra sewing on the box pleats of the skirts, so that they don't end up ripping up to the waistband. Ironing on about 30 labels with names on, not so much for the benefit of the schools, but to save kids here rowing in the mornings about whose tracksuit bottoms belong to whom.

I still have a list of things to get as long as my arm. It's not that I'm a last minute lassie, it's just that it really does take the whole summer to organise things. Things like a pack of twistables x 3, or rubbers x 20, or even copies (exercise books to forn readers) x 100. And that's not a joke.

I buy pencils by the box load, pens by the bucket. And don't talk to me about pencil parers (I actually invested in an industrial strength one of those a few years ago - best €15 I ever spent). But somehow when we get to Christmas they're all gone - poof - vanished into thin air. I reckon there must be a hole in each classroom where stationary fairies live with a huge hoard of the little buggers. Maybe they re-sell them on fairy-eBay...

Ah well. The upside of all this expense is that next week I get my house back to myself between the hours of 8.30am and 2.45pm, Monday to Friday. I think that's something to look forward to: the sweet smelling sound of silence. Oh yeah.

And in between all that I've been writing poems, and getting ready for my own new term of writing classes to begin. You know what they say: ask a busy woman ...
Posted by Unknown at 7:20 PM 13 comments:

Labels: back to school, family life, stuff about stuff

I'm just about revived from the Flatlake Festival in Monaghan. Pat and Kevin and their very able crew ran a very tight ship and I got to see quite a few other acts as well as reading with the Prufrocks, and the Diva Collective.

I saw a brilliant one-act solo show about the wife of Dylan Thomas, Cait McNamara. The actress doing this ran the whole gamut of emotions and really got across what it might have been like living with someone like Thomas, being tied down with babies and wanting to have a life of their own too.

Our act, The Prufrocks, was sandwiched between this show and a Harold Pinter tribute (which included the lovely Keith Allen, nowadays better known as Lily's dad).

Liz Gallagher led us off down the path reading from her brand new, hot-off-the-press collection from Salt books, The Wrong Miracle. She was followed by Jaki McCarrick, who not only writes poems and prose, but writes plays (award winning ones too!). Mary Mullen, originally from Alaska but who now lives in Galway gave us some poems that evoked living in Alaska in the 60s, and then Nuala Ni Chonchuir took the stage to read some poems that will feature in her new pamphlet forthcoming from Templar, Portrait of the Artist in a Red Car. I finished up the set, and I got a bit of a fright when I stood up to read. I had been sitting in the front seat, focussed on the readers, so I hadn't been aware of the crowds pouring into the tent. It was by now packed to the rafters!

*** Late edit: Nuala Ni Chonchuir has posted her report, complete with pictures of all the Prufrocks who read - do pop over and take a look! *** 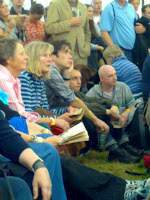 If you embiggen this one, you'll see Cillian Murphy, star of Breakfast on Pluto, gazing enraptured at, well aparently it was me! EW took the picture. 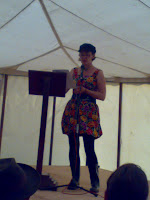 And this is meself in my reading garb, complete with de-rigeur wellies! Despite the shadows, we had a lot of sunshine on the day - some weather gods smiled on us!

Later on I read with the Diva collective, at Radio Butty/Mondo Rancho, compered by Pat McCabe himself. We were on after The Poetry Chicks, who did a specially commissioned piece by Dermot Healy for the occasion as well as some of their own inspired performance pieces. If you get a chance to see them anywhere, you should go along for a look, they are brilliant.

As for ourselves, the Divas, we also amazed with our own work, and that poem about boobs I may have mentioned a good while back finally got a good airing in public. Seemed to go down pretty well, judging by the laughter it got...

Unexpected highlight of the day: Jinx Lennon's act in the Butty Barn. I'm willing to bet you've never heard such a great song title as 'Gobshite in the House,' or 'Everyone's got a mental home inside their head.' Jinx is described as a "a proper seanchaí, a punk, a poet, a troubadour and fuckin nutjob to boot," in a review over on his website - and I'm not joking, I was mesmerised by the whole act that I saw. Words just don't do him justice - go and see him if you can. He's got my respect and he lives here in Dundalk, right under my nose and I never knew what he was up to!

Now, I must get on with this back-to-school malarkey and do me other job: being mum-of-six ...
Posted by Unknown at 9:00 AM 9 comments:

A quickie from holiday land in Ciarrai to let you know about - Flatlake Literary and Arts Festival on this weekend, 14th, 15th & 16th August at Hilton Park, Co. Monaghan.

I'm in two acts: The Poetry Divas, and separately with the Prufrocks, which also features, Nuala Ni Chonchuir, Liz Gallagher, Mary Mullen and Jaki McCarrick. Saturday for Prufrocks and I think the same for the Divas ... my (limited) internet connection here in the wilds of Kerry is a bit intermittent.

Links later dudes - in the meantime, think Butty Barns, madcap antics, possible mud and definite enjoyment - then you have the essence of Flatlake!

Bring your stylish wellies and your feather boas... :)
Posted by Unknown at 10:13 PM 4 comments:

I have a story in Indieoma's latest feature: The Great Outdoors.

It's called Jacob's Ladder. Have a look see and discover why rock-climbing is something of a passion of mine.
Posted by Unknown at 10:14 PM 6 comments: