It's been a terribly long time since I had a poem up here and as Rachel rightly points out I rarely talk that much about what I'm doing writing-wise, which probably leads a lot of people to think that I don't write much.

Au contraire! But I am horribly self-critical of my own work, so I like to try and get things into the best shape possible... which ain't easy in present mega-biz conditions: finishing off CW classes for this term; assembling Santy lists; booking me graduation at QUB for me masters; trying desperately to finish B&W photography work for artist's book of image/text to be launched on 9th December at Belfast Exposed... and there are other things I have to do too, like get a job (He's told me - no more slacking!?!)

Nothing as wearing as nothing concrete to focus on. Yes, there's Christmas... but all I feel for that is a world-weary 'neugh.' If I didn't have six young 'uns to satisfy, I'd quite happily head off to an island somewhere, preferably uninhabited.* Possibly it's because I'm almost 'another year closer to death.'**

Some new plans are needed... but what?

* And definitely not with Tom Hanks!
** Pink Floyd have an awful lot to answer for sometimes.
Posted by Unknown at 6:25 PM 12 comments:

Times article on 11th November, on why Bill Bailey doesn't Mock the Weak... and what he's doing next year to raise the profile of dear old Alfred Russel Wallace, who will be ignored whilst Darwin is celebrated... even though Wallace reached the same conclusions as Darwin at more or less the same time!

Today was a fantastic day with the writing workshop that I organised for my Wednesday and Saturday classes with the short story writer and poet Nuala Ni Chonchuir. 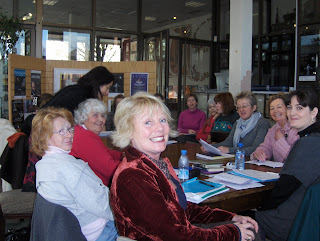 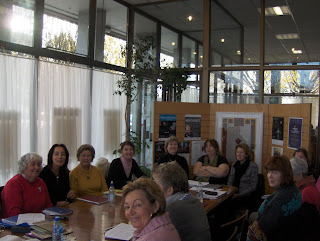 As you can see from all the smiling faces, everyone seems to have enjoyed Nuala's input. We covered the 'theory' aspect of short stories in the morning, and then in the afternoon, Nuala gave everyone useful feedback on the work that had been submitted. The standard of work in short stories and poetry was very high indeed, which is very encouraging and affirming for everyone involved.

As ever, huge thanks to Dundalk Arts Office for their fantastic support, without which these workshops simply wouldn't have been possible.
Posted by Unknown at 10:57 PM 11 comments:

Guess Who's Coming to Town

It's been a hectic few weeks. We've got Nuala Ni Chonchuir coming to Dundalk tomorrow to work with the two writing groups that I teach CW to.

We're very much looking forward to her visit and words of encouragement and advice. It's going to be a full on day, with lots to mull over afterwards.

On other fronts, I'm knee deep in a project at QUB, an artist's book that each of us has to make, incorporating text and image. I've spent the last three Thursdays in the dark room at Belfast Exposed, making photograms, and developing B&W pictures from negatives. I'm using a poem about taking photographs with an old fold-out camera.

Our tutor managed to source a camera shop in Scotland which was selling off old camera stock. She brought me home a rather marvelous 'Soho Cadet,' made from bakelite, about mid 1930s or so. I've taken pictures with it, developed the film and am dying to see the photographs - alas no time yesterday.

Still waiting for the result from the MA... at this stage I'm pretty nervous. They should be out soon...
Posted by Unknown at 8:46 AM 3 comments:

On what elements this particular judge was looking for in a short story.

It includes the silly formatting mistakes that people make that eliminate them before the story's even read; and how important the authorial voice is in a story.

Brian Hodge describes 'voice' as "the fusion of 1001 little aesthetic and stylistic choices." Yes, voice is that hard to quantify: it's similar in poetry too.

Storytellers Unplugged is one worth keeping an eye on, if you're into short stories, and the competition end of things especially.
Posted by Unknown at 10:30 AM 3 comments:

The Times they are a changing...

"If there is anyone out there who still doubts that America is a place where all things are possible; who still wonders if the dream of our founders is alive in our time; who still questions the power of our democracy, tonight is your answer."

Obama's Acceptance Speech at Chicago's Grant Park.
Posted by Unknown at 8:39 AM 10 comments:

Musing on the Muse

I've been having a thought (see comment in box below previous post) about the muse. Mine's definitely a male figure, but poets in the past of the male variety have had a predilection towards the female Muse. I'm thinking Robert Graves writer of The White Goddess (and much else besides) and his muse was, for a while, Laura Riding.

The concept of the muse for the poet (or writer) is certainly nothing novel. Coming from Greek myths and legends, the muses number nine and you'll find plenty of references to them in names being used for all sorts of things.

My dictionary of etymology relates muse to muzzle: the image of a dog scenting the air when in doubt as to the scent. And there's the thing. Sometimes you're thinking about something (or nothing at all) and an idea pops into your head. You decide it will make a good poem, but you don't know the outcome. Finding the outcome is why you write the poem/short story/novel. It's how we all work.

That dictionary also relates muse to mosiac work; originally from the Latin and Gk, mosaic work literally belonged to the muses... so does museum; lit, a temple to the muses. How we piece our work together slowly and painstakingly.

So, if my muse is male and unkempt, a bit hairy and um... very male... what's your's like? Or could you be arsed to have one. They're terribly hard to keep going...