This week's been great - all these books started arriving in the post and then yesterday my youngest son brought up an envelope that my husband had missed: a book that arrived while I was away, before I got sick - The Floorshow at the Mad Yak Cafe! I'd been looking forward to buying this and reading it, but it was a real unexpected surprise to find it already here :)

I ripped open the envelope and was delighted to read Colin Will's work inside - intially impressed by the closing Far Eastern sequence, which includes the title poem; avoids being 'tourist poetry' by the fact of being calm and examining, without trying to judge by Western standards. Others that jump out at me are 'Mr Self-Destruct does not want to workshop today' (great title, huh?); 'Old campaigner,' 'Exiles,' and these are just for starters. I recommend this book, just for the whispering subtlety that is shown in poems like 'The Jewel in the Gym.' Imagined or real emotion-scapes, I think its hard to tell the difference between them; here's a writer who's invested a great deal in the act of imagining and making art from that act. Something about it, which reminded me strongly of the work I'd been reading earlier in the week, Michael Donaghy's Safest.

Other books received: from Michael Farry, (thank-you - so much) a whole block of Roths (could that be a new turn of phrase). I started with American Pastoral, which I found heavy-going, but brilliant at turns. I read the shorter Everyman yesterday and I actually loved it: the grim, gutsy Jewish humour behind every twist and turn of the protaganist's fate. It starts in a graveyard at a funeral, and tells the story of how the bloke in the coffin came to end up there; supplying all his faults and failings in between. As an examination of the life of a man and an exposition on the theme of regret, I thought it was pretty masterful. I did wonder though, if it was a healthy thing to be reading about someone with dodgy health, when my own health is dodgy! I have The Plot Against America to go, but I might wait for a few days; Roths are rich and need digesting.

Currently reading Ariel's Gift, which TFE had a spare copy of, and am reading it in tandem with Birthday Letters and Ariel, which are staring at me from the bookcases in my bedroom. A'sG is meaty and interesting; how we are all obsessed with Hughes and Plath and what happened to them both. Underneath, they were people -deeply flawed, deeply talented, but people. Erica Wagner seems to want to show how Hughes paid for his repression of his part of the experience, but tried to make up for it with Birthday Letters. More on this when I've read it, if I haven't got fed up with it...
Posted by Unknown at 12:01 PM 4 comments: Links to this post

It's nice to be mollycoddled like I have been in the last four days. Breakfast in bed; lunch and dinner made for me. All I have to do is eat and not complain. He is becoming a very good cook - I trained him well ;)

I don't have to worry about shopping, laundry, what the kids are up to - nothing. It's a bit weird and takes a lot of getting used to, as I normally hold the reins of control quite tightly. Too tightly, he says. It's a bit like being a kid, not having these responsibilities. All I have to worry about is eating, sleeping and the mere body basics.

So, I'm reading: Elizabeth Baines new book, Too Many Magpies arrived yesterday. I read that to the strains of a programme on Madwomen in the Attic. How appropriate; the undercurrent of paranoia is so well maintained in EB's tightly woven book. I also have some Philip Roths coming in the post - and I'm getting a chance to look around the web and catch up on people's blogs.

Everything has slowed down to the pace of the Radio 4 programmes I listen to. There is nowhere I have to be or do. I just have to learn to be better and not push it at all - I paid for that yesterday and ended up sleeping in this morning. Softly, softly.
Posted by Unknown at 6:17 PM 8 comments: Links to this post

Before I headed off to hospital Friday a week ago, I had the rare pleasure of hearing Martin Dyar, winner of the 2009 Patrick Kavanagh Award for an unpublished ms, reading to a select group of about 40 - 50 people.

The setting was magical: the drawing room of an old country house, Annaverna House, in the middle of a forest, on the slopes of Cuchulainn country - Ravensdale and the Cooley Peninsula. First, some readings by local writers; some who are getting started in the trade and some more established (yeah, I read too).

After drinkies and chat, Martin Dyar totally wooed the audience with his tales of characters from Mayo, his muscular language - I heard comparisons being made with Ted Hughes' work! Long poems, short poems, humorous and restrained, he brought something for everyone and had us all utterly spellbound. He even read the poem he read last year at the Irish Writers' Centre, Dublin for the Stinging Fly launch, which I think is called 'Death and the Post Office.'

That reading has sustained me over what became a very trying week. I ended up in hospital (again) from Sunday, with a partially collapsed lung, as a result of pneumonia - which I think I may have had for some time - fatigue and a persistant pain under my left ribs had been diagnosed as, well, something 'muscular' ... hmm.

It's going to be a long recovery, and you can help me: what I'm looking for are a list of books, easily obtainable, (think Easons for a start - possibly Amazon) that I might enjoy - come on guys, save my poetry & prose soul!
Posted by Unknown at 4:27 PM 14 comments: Links to this post

I never knew how much pain two tiny wee holes could cause you! Well, it's all over bar the shouting, but it went well yesterday, despite me blubbering like a baby in the ante-room before I went in - last November I hadn't a good experience with the medication I was given before the colonoscopy; I was lucid for some of that experience and it gave me nightmares for weeks afterwards. Put it this way, yesterday I was scared witless.

Needless to say, the anaesthesia staff were really kind to me, and I was away with the fairies before you could say 'general anaesthetic.' I came round after a forty min op which sorted me all out for now. Into the wee holes they made, one under the belly-button, one above the bikini line, they inserted cameras and instruments, as well as Carbon Dioxide which helps to make space so that they can see around the organs a bit easier.

So, today, apart from these weird pains in my diaphragm and shoulders (which is caused by the dispersion of the CO2 and is normal after a laparoscopy) and my stomach feeling like someone peformed Riverdance on it with elephants that were high on red bull (maybe they did, who knows what they get up to in Theatre when you're out for the count!), I'm grand. Nothing that a bit of Difene and some extra strength Nurofen, as well as a good night's sleep won't cure. Aren't we women fierce resilient all the same?
Posted by Unknown at 5:11 PM 13 comments: Links to this post

... tomorrow I go under the knife - well, only a tiny hole actually; that's the beauty of a laparoscopy, a teeny, tiny hole, through which they insert a camera, CO2, the kitchen sink and whatever else they can get up the tube that goes into my tummy.

I'm just concerned about whatever it is that may come out... or, there being nothing in there and the pain is just 'in my mind' (thank you Eddie Izzard, for that one).

Either which way, I will be out of my mind for at least one day. No change there, then... :) 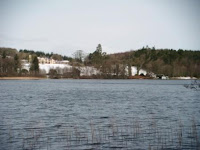 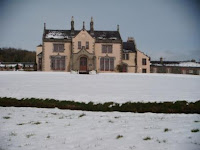 Pics of the great house at Annamakerrig, otherwise known as the Tyrone Guthrie Centre for Writers and Artists, and the lake in front of it from the far side - a bit mucky but worth the walk.

So, there we were in March, and we thought spring had finally arrived, but it turned out that winter still had a sting in its tail to deliver.Still, I've had a great time sorting out my poems, writing a few more and letting some air into the cobwebbed spaces that were my mind. I feel refreshed, recharged and ready to face the next few weeks...!

The snow is now melting here and the sun is quite warm - and it's April.
Posted by Unknown at 4:48 PM 4 comments: Links to this post