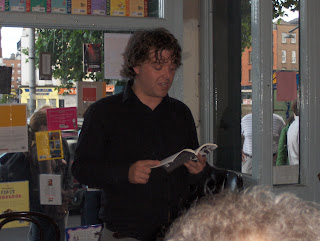 Lordan's book has been published by Salmon Press, Ireland and was previously selected as the Patrick Kavanagh prizewinner of 2005. Indeed Salmon Press are one of the big hitters in poetry publishing in Ireland, a fact that Dave humorously alluded to in his own few words last night. That last link will take you to three of Lordan's poems from the book. This prize is awarded yearly to poets who have not been published, and most prize winners go on to greater things afterwards.
The Boy in the Ring was introduced by Ronan Sheehan, an Irish novelist. In particular Sheehan spoke of how Lordan's work engages with the political as well as issues of society. He also gave some history behind the poem Attis and Cybele translated from Catullus, the Roman poet (1st century BCE) as part of a wider commission. Dave read this long poem out later on, and I can testify to it's raw power. Not many poets write about heroes that rip their own balls off... Reason alone perhaps, to get your hands on a copy?
I made firm new friends with Elena, Tina, Claire and Maria not all necessarily poetry supporters, but appreciative nonetheless. Proceedings retired to Toners of Baggot Street, with some music -acoustic and live - and an Open mic, which revealed some of the talent that Lordan has been encouraging in his role as a creative writing tutor.
A nod to Hazim here, an Iraqi actor/poet. His performance piece wrapped us all in existential twists and he is appearing again in Dublin on the 4th of July, at the Project Arts Centre. We finally topped the night off in BiaBar in Temple Bar. It was a truly great launch, a testament to the great warmth of Lordan and his cohorts. Hello to Rosa too!
Update: Dave has since left a link to the Attis and Cybele poem which can be found here. Brilliant!
Posted by Unknown at 2:34 PM

Why did he rip his own balls off?! I mean vasemctomies are quite common and relatively painless these days...

Good question John. This version is but one version of the myth. There is no Attis without Cybele and Zeus seems to be in there too. It's a classic tale of revenge and love gone horribly wrong!

I'm not surprised it went horribly wrong but that's hardly going to stand up in court is it...:-)

my version of the poem is at this link http://rudy.negenborn.net/catullus/text2/e63.htm

I bet he had a lovely signing voice though. I like the Lennon poem. I stood on the spot in NY and found it really moving.

Good Time Was Had By All.
Love Dublin, lucky you!

Duke of Venice said:
my version of the poem is at this link http://rudy.negenborn.net/catullus/text2/e63.htm

dave
Jon said: wow I've been and read it...raw power has it, I would say! Hats off!

Fair play Dave thanks for leaving a link to it!